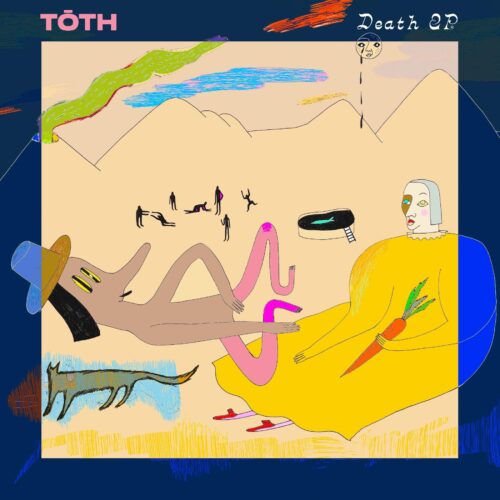 DEATH EP is a collection of songs written by Tōth between 2019 and 2020, when someone important in his life, a family member, was dying of a disease he himself is in recovery from—alcoholism. He spent that time trying to help them, and in the last two years of their life, he connected with them more deeply than he ever had. “Muerto” and “FKA Bluets” are more directly about the experience, whereas “What is Your Deal,” “Cockroach,” and “Hey Dude Etude” are more existentially inspired by the time. All of these songs were recorded in the same sessions as Tōth’s most recent LP, You and Me and Everything, but they felt like they constituted their own world hence, DEATH EP.

“Muerto” is written from the perspective of Death or a bodiless entity pleading to someone who is still alive not to give up. “Cockroach” is a heartbreak song to a cockroach. “FKA Bluets” is a narrative song, which started out as Tōth turning the prose of an author he loves into a song, but permission to use those words was denied, so he traced the syllables and rewrote the lyrics to reflect his own life more closely. The person who this is about was complicated but loved by all. “Hey Dude Etude” is a brief, distorted, and existential self-portrait written as spoken word dialogue over music. “What is Your Deal” is a playful jam about lost connection and suicidal ideation—party time!

Throughout this EP Tōth plays with the contrast between dark and light—sadness with a sense of humor and upbeat music. There is no question that life is difficult, even brutal at times, and Tōth believes it’s helpful to meet that with an acceptance and a lightness even. Recounting a story told to him by a Buddhist monk about Carlos Castaneda, Tōth says, Castaneda was approached by a student for spiritual advice thinking he would tell them about which peyote to take in which desert and with which shaman but instead, Castaneda gave them this advice: “The most spiritually transformative thing you can do is, when you wake up, remember how you and everyone you encounter today is going to die, not in a morbid way, but just in an appreciative acknowledgment.”