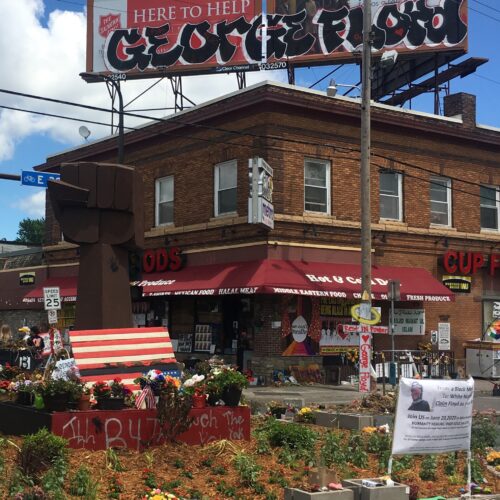 Composer, musician, artist, and writer Melvin Gibbs today released 4 + 1 equals 5 for May 25, an EP of incredibly affecting material reflecting on the murder of George Floyd from various points in time over the past year. Alongside the music, Melvin Gibbs issued the following personal statement:

I’ve been to holy sites all over the world. I’ve been to Zen temples in Kyoto, Japan. I’ve been to mahasamadhis, places where Hindu holy men are buried, and dargahs, places where Sufi masters are buried, in India. I’ve been to the Church Of The Holy Sepulchre, the place where  Jesus was crucified, and the Temple Mount, the holiest site of Judaism, in Israel. I’ve been to churches in Europe where holy relics are stored. I’ve been to African religious houses in Brazil and Voodoo ceremonies in Brooklyn. The vibe I felt in June of 2020 when I was standing in George Floyd Square, at the intersection of 38th and Chicago in Minneapolis, is something I’d only felt once before. That place was the grove outside of the A-Bomb Dome in Peace Memorial Park in Hiroshima Japan. The A-Bomb Dome is a skeletal structure, a remnant, that marks Ground Zero, the place where Little Boy, the first atomic bomb, landed. So, when I say that the intersection of 38th and Chicago in Minneapolis is the American Ground Zero, I’m not using hyperbole or metaphor.

The vibe I felt at Peace Memorial Park is the vibe that fits the name of the location. In fact, I felt more peace there than in most of the Zen temples I’ve been to in Japan. The vibe I felt at George Floyd Square was that same vibe, but amplified. Amplified enough to send a Wave of Peace equal to the cataclysm that had occurred at the Square across America and across the world. That peace doesn’t erase the cataclysm, but it provides a path to balance it gives a possibility of tempering it.

The vibration at the square was one vibrational cluster. The vibration of the physical and psychological aftermath of Mr. Floyd’s murder was another. My challenge became to create music that I felt captured both.

The 38th and Chicago music needed to manifest Peace while facing up to cataclysm. It needed to be improvisatory. It needed to be built in a way that transcended cultural borders and breached mental boundaries.

The aftermath music, on the other hand, had to be a reflection of what was going on in the streets. It needed to manifest through the rhythms that were ricocheting in the streets at that moment. But it also needed to relate the generations that have struggled and set the stage for the moment and the movement to have the effect that it did. It needed to reflect the emergent structure that was unveiling itself, the hatchling emerging from the cracking egg.

Another important consideration was my role as a trusted advisor, as Uncle. The music had to speak, and speak with the youth that put their bodies on the line, not to them. It also had to take the health of the community as a whole into account. That meant I couldn’t just address the concerns of the moments and events that occurred in the immediate aftermath of Mr. Floyd’s murder. I and my music also had to be there for the murder’s trial and be capable of addressing the outcome of that trial, whichever way things fell.

The forced return to The Essence at the age of 46 of a man from Houston, Tx. named George Floyd at the hands of an MPD officer is one event that has happened on May 25th. Another is a completed emergence from The Essence, an emergence which signifies the creation of a family. This date also marks the emergence out of the body of Olivia Gibbs nee Law of a newborn, a child who she and her husband Rufus decided to name Melvin. The fact that the celebration of one event and the memorialization of the other will be forevermore coincidental is why the EP “4 + 1 equals 5 for May 25” was made.

When the day of May 25th, 2020 became the night of May 25th, 2020, my circle’s low key celebration of one human’s survival of another revolution of the Earth gave way to anger at yet another African – American’s demise at the hands of the police. Footage of the event captured on a witness’s cell phone was graphic and undeniably powerful. As this footage flowed from screen to screen across the internet it caused an exponential emotional cascade. The anger it created grew past the point of containment and caused a spontaneous eruption in cities across the globe.

One of the striking things to me about this turn of events was the total uselessness of celebrity as a concept and celebrities as people to the movement that took hold in the streets. The movement was a truly bottom-up one, and celebrities and the hierarchy they represented weren’t needed, and in fact, they probably would have been a hindrance.

Another thing that was striking to me as a person who creates cultural objects was that there didn’t seem to be any music out there that actually captured the moment. The music of past eras of protest and the movements they engendered just didn’t rise to the occasion. There was no music that captured the complexity of the current cultural moment. Here in New York, as well as in other major cities, the protesters in the streets ended up repurposing popular songs as a means of motivation and creation of group cohesion. In particular Pop Smoke, a Brooklyn drill artist whose music voiced the thoughts of a braggadocious trapper provided the main soundtrack of the protests. His “Dior”, with the name of the designer replaced with the name George Floyd, was the song chanted by the crowds. And his “Christopher Walking” was one of their major motivational materials.

As an artist, I saw the fact that there was no music that accurately captured the vibration of the moment as both a challenge and an opportunity. What did the music of the moment sound like? What sounds should this music encompass? What moods and motivations should it encapsulate?  It was obvious to me that the only way to really solve this was to go to Ground Zero, to Minneapolis, to George Floyd Square, and spend time there so I could see and feel for myself exactly what the vibe needed to be. I needed to imbibe the cultural oscillation that was vibrating America while sending its wave across the planet at the source.

It so happened that the verdict that was eminently justified by the circumstances surrounding Mr. Floyd’s death was given, and some measure of closure was granted. But, the very day the verdict was read a teenager was murdered by the police in a suburb directly adjacent to Minneapolis. We were given an unneeded reminder that the cycle continues and there’s more work to be done.

I’d like to acknowledge the voice of the Uncle on this EP. It’s Washington D.C.’s own Kokayi, who is the Uncle of the DMV rap community. When I told him what I was setting out to accomplish he imbibed the concept, then embodied it.

This is the George Floyd Square vibe.

This is the aftermath vibe.

This is peace striving to balance cataclysm while (hopefully) bringing Compassion. This piece was inspired by jazz musician and healer Milford Graves’ (RIP) insight that the life situation of African – Americans requires us to be inherently Zen – whether we are consciously aware of the teachings or have been made aware of the teaching or not.  The title is a riff on John Cage’s 4’ 33”. You can think of it as the BLM remix of that.

Uncle reflects on the verdict.

5) Message from the Streets

Emergent synthesis – a structure that bridges the peace/cataclysm duality.