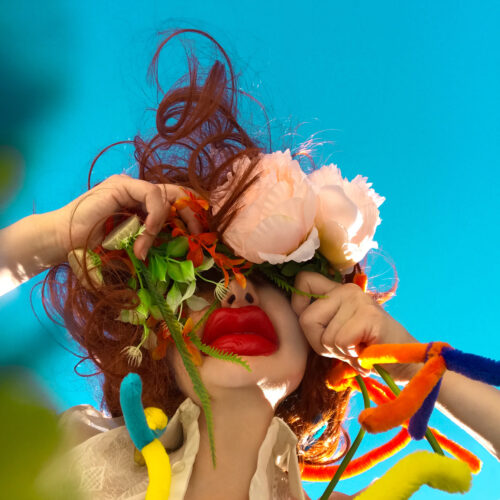 Brooklyn singer-songwriter and producer Sarah Pedinotti’s newest release as Lip Talk plays like a greatest hits collection of a pop artist from a world built in the image of our own, but one full of anomalies and deformities. On Laughing & Eating Cake, Pedinotti imagines contemporary pop and R&B through a refracted lens, where tidepools of electronic malfunction form between hooks that could go toe-to-toe with the Top 40 hits of this planet.

The music creates a sonic environment as decadent as its title suggests, and as stylistically varied as her resume as a collaborator and session musician. Its ten tracks are brimming with musical ear candy—twinkling synth counterpoint, psychedelic guitar sludge, brittle drum machine sputters, and vocal processing that runs the gamut from spectral Autotune to gritty overdrive. Sometimes, it feels redolent of the chilly hyperpop grooves and digitally contorted vocals of acts like Charli XCX or SOPHIE, but Pedinotti’s performances are never devoid of soul. Often, she channels aspects of the R&B-informed experimentation of her group Kalbells, with funky Prince-like guitar chops and vocal rhythms that stick with you as much as her melodies.

The virtuosic musical pivots mirror lyrical shifts between celebrations and indictments of human excess. In the former category is the neo-soul-inflected “Marie,” from which the album title is taken, in which Pedinotti recalls a moment of familial celebration and reconnection over mouthfuls of cupcakes. On the bleaker side of the spectrum, “Bargain Day” evokes a rabid and undirected hunger for consumption; “More” takes that theme a step further, striving to conceptualize, as Pedinotti puts it, “a dream world of cosmological camp that gestures toward a world beyond capitalism.”

On many of these songs, Pedinotti drew material from writing exercises: a song-a-day challenge and an ongoing practice of writing songs inspired by a single image. These rituals give birth to some of the most disarmingly intimate moments of L&EC, where Pedinotti suddenly seems to be whispering in our ears, drawing us into small scenes and moments. The nostalgic and patient “Solar Return,” for instance, recalls Kate Bush’s tributes to the sun and cosmos on her album Aerial plus one Dolly Parton reference; muted drums careen across the stereo image like waves at high tide.

The closing track—the aptly titled “This Is a Song”—seems to strip things back to the very root of Pedinotti’s process and creative impetus: “This is the sound of my voice in the morning,” she sings, against a spare circular chord progression and a hypnotic marimba drum loop somewhere off in the distance. Later, she personifies and addresses the song itself—a temporary lover or friend providing a salve: “This is a song that I never cared about/and this may be one of the weeds that I tear out/But today I’ll let her be, I’ll let her cover me/She’ll wrap her arm around me.”

The track distills a throughline across this singular release: these songs feel like celebrations of their own process. More than drawing us into overt emotional turmoil or autobiography, Pedinotti’s songs brim over with enthusiasm for musical creation for its own sake. The music on Laughing & Eating Cake is dynamic enough to make this kind of sonic self-actualization feel more resonant and life-affirming than the work of many conventionally confessional songwriters. It draws the listener into a musical universe that, even with its unearthly digital trappings, feels intimate and welcoming.