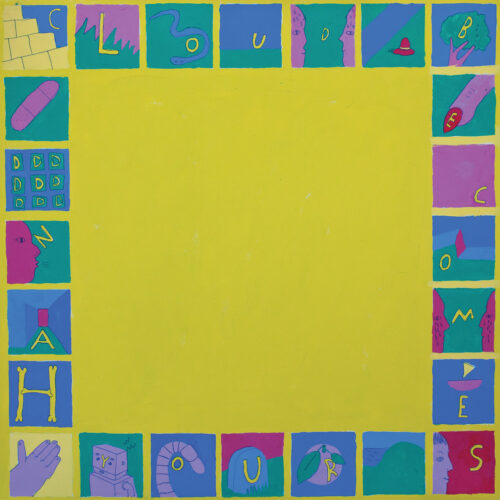 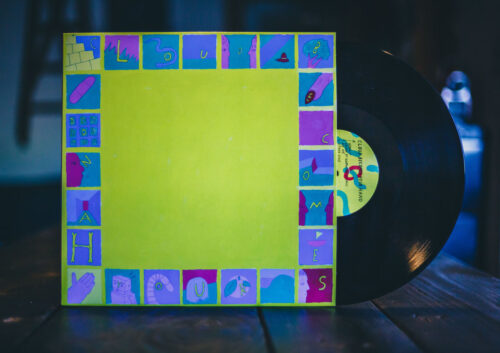 Like visions from a 3D comic book, color fantasies explode in vivid new sound-­tones on Cloud Becomes Your Hand’s Rest in Fleas. The band’s second album for Northern Spy establishes the Brooklyn sextet as purveyors of googley­-eyed psych-­pop of the highest order, delivered in a kinetically singular dialect of the musical language of fun. Over eight tracks, Cloud Becomes Your Hand affirm their position in the secret lineage that links the pingings of the BBC Radiophonics Workshop to the happy goofing of Syd-­era Pink Floyd (like if the busted gearwork at the end of “Bike” started its own band?), a line that connects the energy dome power of Devo to the collage-­happy Frosted Ambassador wing of the Elephant 6 Recording Company. Feed your head, right? But while the collective destination might be the sweet innocence of marmalade skies, the Cloud irregulars are hardly musical naifs, executing dazzling conceptual and compositional turns that puts them just as much in the family of New York’s uncompromising experimental music scene.

Led by multi­-instrumentalist and composer Stephe (the ph is hard) Cooper, Cloud Becomes Your Hand’s complex art-­pop bursts into being from fragments and scraps, collaboratively sewn together into benevolent smoke­spewing contraptions that spin around drumming drummer Booker Stardrum and Sam Sowyrda’s MIDI-­triggered malletKAT percussion. Along with Hunter Jack (violin) and Weston Minissali (synth/vocals) comes the addition of bassist Simon Hanes­­–formerly of comrade DIY brain­-exploders Guerilla Toss–whereby the Cloud gang gains some new rhythmo-­melodic heft on their journey to the centre of our mind. Lyrics come courtesy of ongoing collaborations between Cooper, his friends, and some anarcho muse guiding the whole cotton candy ship, and Rest in Fleas sets down on our planet with enough bouncing choruses and surprise left-­turn hooks for the whole happy mutant family.

Much like Cooper’s songs, Cloud Becomes Your Hand has multiple origins. One is a theatrical stage experiment produced by Cooper and Cloud malletKATer Sam Sowyrda called Living Things-­currently neither active nor disbanded–­­which yielded the stage instruction from which the Cooper drew the Cloud Becomes name. Another origin are Cooper’s subsequent home recording endeavors released on cassette under the Cloud Becomes moniker, including Cloud Becomes Your Hand (2010) and Doggy Paddle (2011) before drafting an ensemble into service for live work. “Like punk rock coming out of a music box,” Stereogum described one such performance. “A joyful journey through a strange land,” said the New Yorker. Rocks or Cakes, the band’s 2014 Northern Spy debut “thrills, buzzes, dives, [and] surprises,” wrote Relix.

Just at home at hanging out at Brooklyn avant­-garde institutions like Roulette as on homemade stages in over­-enthusiastic loft installations, Cloud Becomes Your Hand are ready to find the doorway to elsewhere in any environment. Rest in Fleas functions much the same, using sleight of hand and pure charm to lash open a portal to the giddy surreal by any means necessary, from learned technique to spontaneous creation. Along with fellow travelers on the kosmik-­noisenik highway like aggro­-eclectic Northern Spy labelmates Dva and Horse Lords, Cloud Becomes Your Hand continue to fight the good fight by not fighting at all, just emitting only the most colorful of vibrations and letting the air and all available ears do the rest.