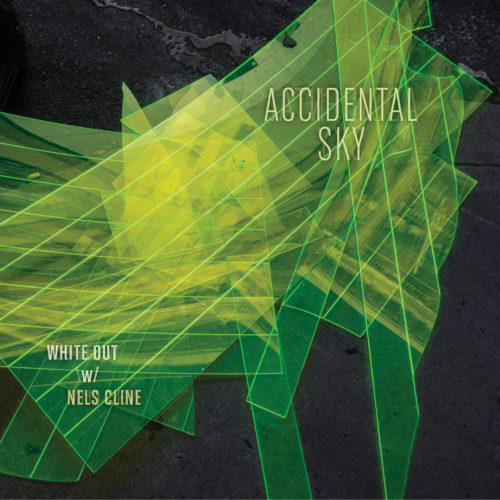 White Out with Nels Cline

New York radical innovators White Out and transplanted Los Angeles legend Nels Cline share a long musical history, having played together for over a 15-year period. Anyone lucky enough to have caught these guys in live performance can attest to their special chemistry. They play a kind of improvised chamber music. Their tightly cohesive interplay the sonic consequence of years spent developing their highly personal electro-acoustic language. Any attempt to assign a label to their collective sound falls short. Reductionist classifications like Free Jazz, Prog, and Experimental, although all applicable, fail to convey the full depths of their jams. The music they make together is as eclectic as the venues they have performed in are diverse: A jazz dungeon in Paris, an artist squat in Geneva, the All Tomorrow Parties Festival in the UK, an improvisers’ compound in Marseilles, or indie rock enclaves in Los Angeles, London, and New York. Accidental Sky represents their first official release, and their first attempt at recording in a studio together. The album does not disappoint.

Accidental Sky runs the full gamut of artistic expression. Some of the more tempestuous tracks like the album’s epoch opener “Imperative,” the laconic “Ragged Mist of Stalled Horizons,” or the jagged “Sirius Is Missing,” range in dynamic structure from deliberate calm to unbridled fury. While other selections are more abstruse, such as the mysterious “Exaltation By Proxy” and the noirish “Under A Void Moon,” which feature haunting themes, sinuous flute lines, and otherworldly vocals. “Winter Light” stands as a kind of sparse tone poem, driven by long reverberating bell sounds. There is even a euphonious ballad in the form of the album’s closer “Soft, Nameless, Absolute.”

Accidental Sky casts White Out in a different light than any of their other previous releases, which feature the likes of Thurston Moore, Jim O’Rourke, and William Winant. As with all their musical pairings, they are able to entirely transform their sound to accommodate their guest collaborator while simultaneously retaining their own strong creative identity.

This album is a long time coming, and the documentation of these artists recording together is cause for celebration. With the release of Accidental Sky, the world at large can finally join White Out and Nels Cline on their eternal quest to explore the infinite possibilities of sound, rhythm, and space.