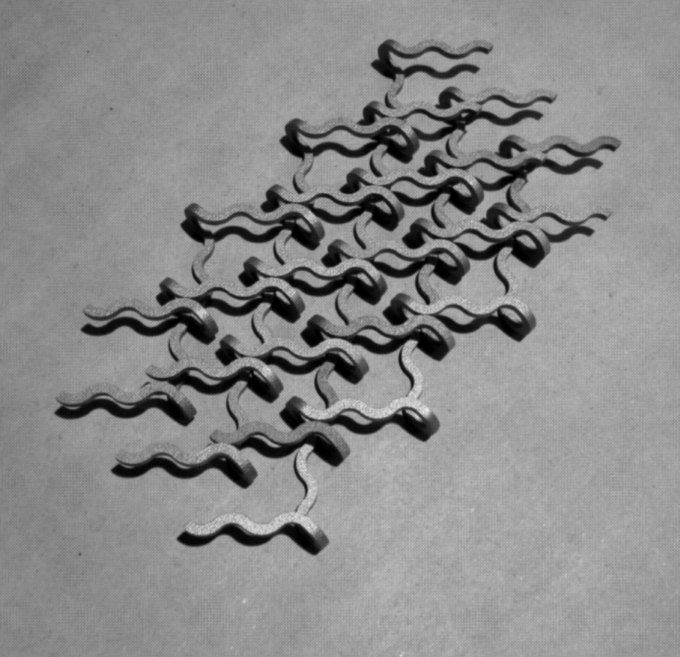 Zs is devoid of genre and unclassifiable. Since 2000, founder Sam Hillmer has remained its purveying constant, and with the addition of loose-limbed, meditative percussionist Greg Fox (Liturgy, Guardian Alien, Man Forever), and virtuosic avant-classical guitarist and composer Patrick Higgins, the band has found its epochal lineup. The trio’s vision is crystallized on Xe, Zs’ first full-length featuring the new trio, and first proper since 2010’s critically acclaimed New Slaves.

The music on Xe even transcends artistic mediums, influencing renowned visual artist Tauba Auerbach, who believed Zs was examining the same structural concerns as her own work. She created several copies of two 3D printed steel sculptures derived from the mathematical varieties of helix known as the Z helix and S helix which she then arranged and photographed in various configurations for the Xe album art. From these, she also developed an original 3D typeface to construct ZS and XE on the interior of the packaging. The album’s minimalist, esoteric vibes aligned perfectly with Auerbach’s mind-bending and shadowy metallic sculptures. The artist attests to have never worked so hard on a record cover, nor gotten so much out of doing so.

Like a bat out of futuristic and primal hell, Xe clangs and clatters out of the gate with “The Future of Royalty,” setting a sinister tone with a pummeling march of doomed knob-twiddling electro-shocks. Ghostly transmittals burst through cascades of hyper-distorted serrations on brutal synth twister “Wolf Government,” not unlike the cataclysmic solar systems of composer Ben Frost – whom Fox has also collaborated with. There’s the fractured sci-fi percolations of the electro-sax futureworld of “Weakling” and “Corps”. Xe’s jaw-dropping sonic architecture is manifested on the eighteen-minute title track, a controlled, yet chaotic, ecstatic marathon thick with its trademark crafted quiet/loud heavy repetition, bleeding of tense, throbbing logic that erupt into euphoric explosions.

There might be no other way to describe Zs than as the deepest of DIY die-hard spiritualists exploring a genre-defying unheard music free of compromise and commercial leanings. Those aesthetics are illuminated on Xe. “The record starts with an explosion of caustic guitar noise and blazing drums and is then followed by a 7-minute desert of noise, finally, 10 to 12 minutes in you get a pulse,” Hillmer says. “No effects, no editing, nothing done in post, just a snap shot of three guys in a room who worked really hard on some music for a long time. That’s what we are bringing, and we really hope people can get into it, BUT! If they can’t, on a certain level, good. It’s alternative music for people who are seeking an alternative, and with this crisp domesticated indie/EDM work on the rise, there may be more and more people seeking that. If so, y’all know where to find us!”