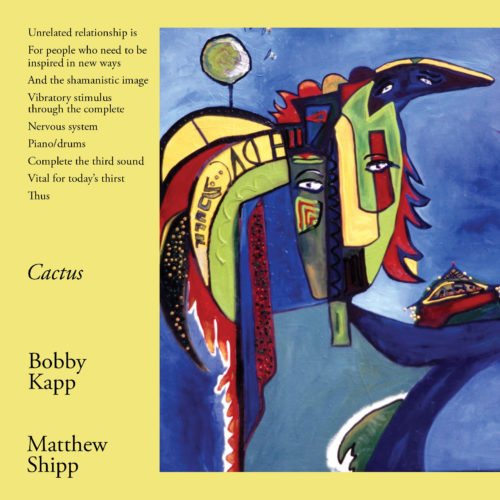 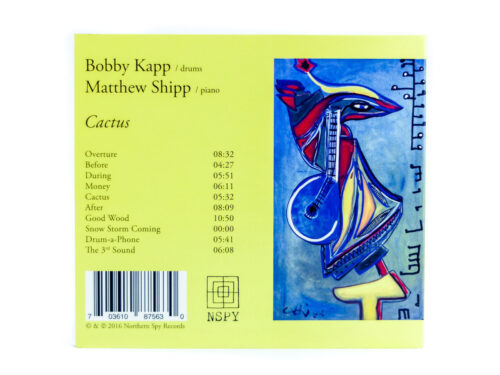 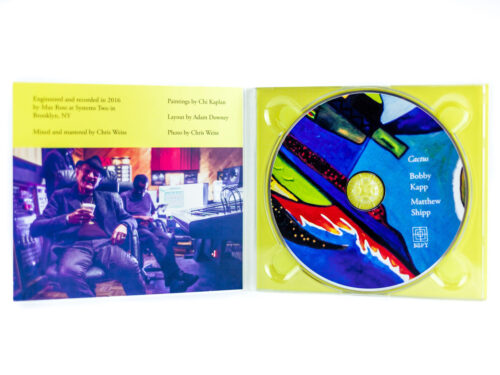 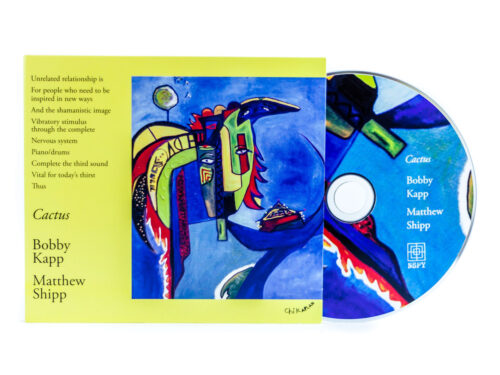 In Valerie Wilmer’s important socio-political history of the jazz vanguard As Serious As Your Life (Serpent’s Tail Press, 1977), the chapter on pianist Cecil Taylor is subtitled “Eighty-Eight Tuned Drums.” Textually this reference advances the role of the piano in free music as percussive in large part, especially as the chordal and melodic directions taken after Ornette Coleman in the late 1950s often appeared to circumvent the more fixed tonalities of the keyboard. Drummers and pianists have been one core team in this music, going back to the forbears and scions of the modern-jazz era — Buddy Rich and Nat Cole; Art Blakey and Herbie Nichols or Thelonious Monk; Denis Charles, Sunny Murray and Andrew Cyrille with Taylor — whether the pianist may work percussively or sculpt the music temporally and melodically.

Drummer Bobby Kapp (b. Robert Kaplan on April 11, 1942 in Perth Amboy, NJ) and pianist Matthew Shipp (b. December 7, 1960 in Wilmington, DE) are a team that has only recently come together, though their affinity for one another is natural and rewarding. Cactus is their first duo recording, a spontaneous set coming on the heels of 2015’s Themes 4 Transmutation, the latter waxed under the drummer’s leadership and featuring Shipp, reedist Ras Moshe and bassist Tyler Mitchell. While the cognoscenti may be aware of Kapp’s name as a firebrand in the mid-60s New York free music underground, he didn’t record as a leader back then. In recent years, after relocating to Mexico, he’s co-led the standards-rooted Fine Wine Trio with pianist Richard Wyands and bassist Gene Perla, and reunited with alto saxophonist Noah Howard before the latter’s untimely passing.

Kapp’s restless energy and streetwise lyricism, yen for the blues and supple templates for unfettered expression took him from New Jersey and Staten Island to Berklee College of Music, where he studied with Alan Dawson, and then Lower Manhattan. There, he played and recorded with alto saxophonists Marion Brown and Noah Howard, pianist Dave Burrell and tenor saxophonists Leandro ‘Gato’ Barbieri and Pharaoh Sanders before eventually settling in an artist’s colony in San Miguel de Allende. Kapp’s sideman recordings in the 1960s are scant, comprising two full LP appearances (Barbieri’s In Search of the Mystery and Howard’s At Judson Hall, both on ESP), two individual LP halves (Brown’s watershed Three for Sheep on Impulse! and Burrell’s High on Douglas), and film footage of Brown’s trio was captured in 1967 by Henry English, but all of this work presents a rolling, massive and fleet economy somewhere between Elvin Jones and Shelly Manne. His more recent outings have been somewhat under the radar, but the aspects that entice—a sure, tempestuous detail—are toned with age, experience and fidelity.

Shipp’s piano is the perfect foil for Kapp’s dryly doled-out metric inventions, his sinewy but factual movements through erudite melody, resonant stomps and granular sideways gestures creating fields and objects through which the drummer’s open, supple brushwork and woody rolls float, undercut and weave. Shipp has worked with a wide range of individual, creative drummers—including Newman Taylor Baker, Whit Dickey, Guillermo E. Brown, Susie Ibarra, Marc Edwards and Steve McCall—and says of Kapp that “Bobby is a marvel as he combines the best of old school drumming with a real feel for pulse and breaking the circle that exists in the avant-garde. However, he can open the beat up in a way where you can flow with the wave and never lose the line. His touch is really refined and that adds to the beauty of his sound. I am always looking for ways to make my comping deeper and working with someone who has played with all the people he has deepens my thing. Also, the sound he gets off the cymbals has a resonance that is beyond deep—it’s like swimming in pure vibration.” On Cactus, nine spiny and flowering dialogic arms are presented in gorgeous sound, creating a language that stems from bebop, free improvisation and classicism but are of the present and specific to these two musicians. Rigorous, spontaneous play that feels this good is something to hold onto.

“Practically without parallel — Matthew Shipp is the connection between the past, present and future for jazzheads of all ages.” – Downbeat

“…In the 1960’s, Bobby was a seminal figure in the so-called new music movement in NYC, recording with Gato Barbieri, Archie Shepp, Noah Howard and others.” – Ron J. Pelletier