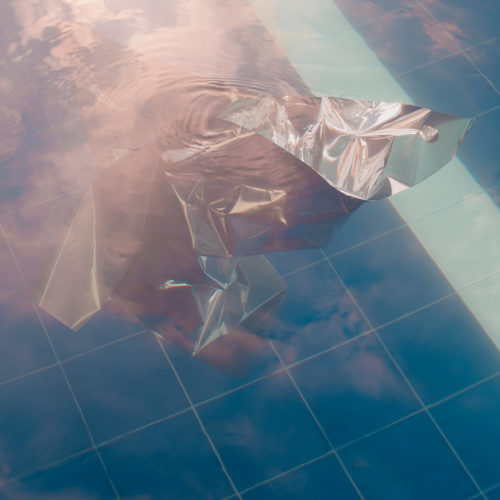 Cuddle Magic recorded their newest album in a bathroom. What you hear is six people performing together (without headphones, amplification, or overdubs) nestled amidst 23 microphones in a bathroom.

In the winter of 2013, Cuddle Magic spent three months camped out at the same address. They wired up the entire place. They explored every trick of modern recording on the way to a beautiful and idiosyncratic set of richly orchestrated tracks. But none of it felt quite right.

… except for one recording, of one song, the product of one fortuitous afternoon spent crowding around a pump organ, huddled in the bathroom.

That project was set aside. The band took some time to reflect, and then they made Ashes/Axis, an album full of swirling, gritty electronic sounds.

But, that singularly successful bathroom recording was never forgotten, and became the inspiration for Cuddle Magic’s sixth album, Bath.

The bathroom transforms the music. It contributes an incredible natural reverb – a few different ones, in fact, with various microphones hidden in far reaches. (It’s a cliche and true: everyone does sound better singing in the shower!) And because the quietest sounds resonate, and because the musicians are packed so closely together, every sound is in every microphone. There’s no hiding mistakes, no way to fix them. Every note is played, and every word sung, with absolute commitment.

Bath is a document of Cuddle Magic playing a lot like they did when they started out. They re-invent tropes of 21st-century pop song structure with the quietest acoustic sounds. It is a distillation of 15 years of mutual experience and experimentation. It’s six talented musicians (all individually prolific as solo artists, producers, and in-demand collaborators) casually in agreement about a shared unique musical language, and so many very specific aesthetic judgements. It’s music that is relaxed, free, and unconcerned.

This album is also, simply put, the sound of six people in the same room breathing and listening together. The band (Alec, Ben, Christopher, Cole, Dave and Kristin) wishes everyone safety & health, and looks forward to the day when we can all, once again, be in such close proximity to the people we love.