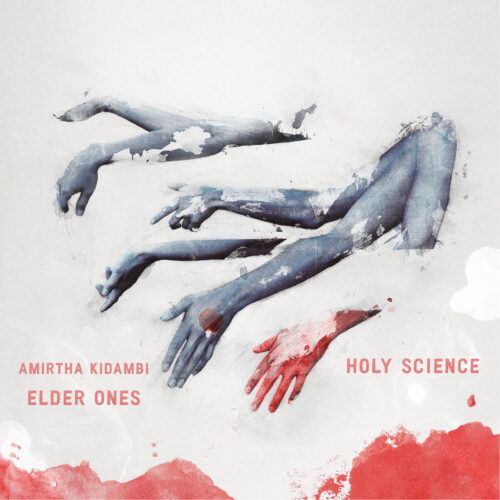 As Ben Ratliff wrote in the New York Times, “the aggressive and sublime first album by the band Elder Ones, Holy Science, is a kind of gauge for how strong and flexible the scene of young musicians in New York’s improvised and experimental music world can be. At the center of it are drones and phonemes. The group’s leader, the 30-year-old composer and singer Amirtha Kidambi, holds forth behind a harmonium, the small keyboard instrument with hand-pumped bellows; it’s commonly used in bhajan, the Indian devotional-singing tradition that was central to her musical experience while growing up in a South Indian family.”

Kidambi formally trained in classical music, singing works by avant-gardists including Nono and Stockhausen, but the pull of free jazz and Alice Coltrane drew her toward a different path. The influence of both Alice and John Coltrane is especially apparent on the new album, as is her work with composer and saxophonist Darius Jones, and her study of Carnatic music.

While in Darius Jones’s a cappella group, Kidambi developed a language for wordless vocals, freeing her from being tied to syntax, a technique she uses through most of Holy Science. The music is anchored by bass-lines and drones on the harmonium, often doubled on the bass by Brandon Lopez. Matt Nelson on the soprano saxophone evokes the sound of the Indian double-reed nadhaswaram, and the playing of John Coltrane and Pharoah Sanders, blending with and harmonizing her voice and the reeds of the harmonium. Drummer Max Jaffe’s ability to seamlessly pivot between complex grooves and timbrally explorative free-playing, completes the equation. Each musician was chosen for their unique improvisatory language on their instrument, ultimately informing Kidambi’s compositional approach.

Reflecting on her various influences, Kidambi explained, “I grew up Hindu, but with a pantheist universalist bent, the idea that all religions are different paths to the same God or Truth. Not only is the music of John and Alice Coltrane so influential, they both practiced universalism. Alice’s primary guru was the same one that my family followed, and she participated in the bhajan singing tradition. I grew up singing with the harmonium, and I know all the tunes on her Huntington Ashram records. She looms large for me as a figure who blended so many different styles and traditions, uncompromising in her vision and authentic to herself. She was, in a way, a universalist in her music, blending her influences of Stravinsky, gospel, free jazz, the avant-garde, world music, and her spiritual practice into a totally individual sound. I really relate to that way of thinking about music and the universe.”

The first piece composed in the suite was “Dvapara Yoga,” which began as a meditation on the death of Eric Garner. The album title derives from a 19th century text written by Swami Sri Yukteswar Giri, which scientifically explains the yugas, or eons of cosmic time in Hindu mythology. The four movements Sathya-Yuga, Treta-Yuga, Dvapara-Yuga and Kali-Yuga, explore themes of creation, destruction, and rebirth, with the final movement pivoting on the Vishnu Sahasranam Vedic chant, and ending with an apocalyptic reset of the time cycle.