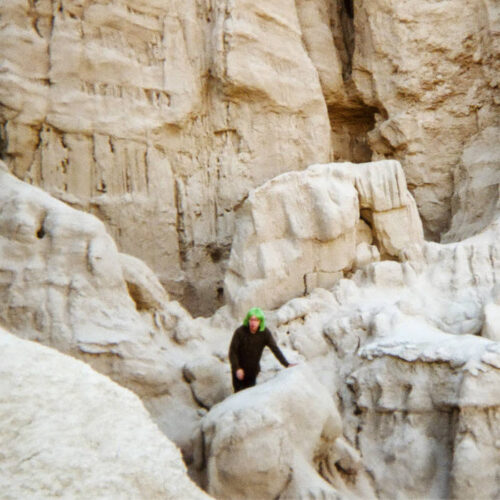 Social Rust, PC Worship’s fourth LP to date and Northern Spy Records debut, may very well be the closest this innovative quartet, led by singer and multi-instrumentalist mastermind Justin Frye, has gotten to the conventional rock formula. But don’t be alarmed—PC Worship has, by no means, abandoned its inherent avant-gardist roots. In fact, Social Rust portends a familial group hell bent on blending its own vision of fully realized songcraft and contagious melodicism into its trademark chaotic din.

Frye first hatched PC Worship as a home-recorded solo project but has since steadily morphed his vision into a collective of studied musicians and improvisers, with Michael Etten, Jordan Bernstein & Shannon Sigley as the core unit and an array of dystopian instrumentalists often showing up to jam on Bongos, circuit bent electronics or any number of horns, all of whom have resided at the Bushwick neo-recital hall “Le Wallet” and, ultimately, forming a full-on, proper band as heard on Social Rust. If you’ve been present at DIY underground shows in Brooklyn and beyond, chances are you’ve been exposed to PC Worship’s shambolic brilliance.

PC Worship stand at the threshold of many worlds, yet they operate at the center of their own pantheon and without abandon. They are crucial eclectics, distinct in sound and consistently adventurous. Like Sun Ra, PC Worship transmit alien, helter-skelter sounds seemingly from another universe—a truly rare trait these days