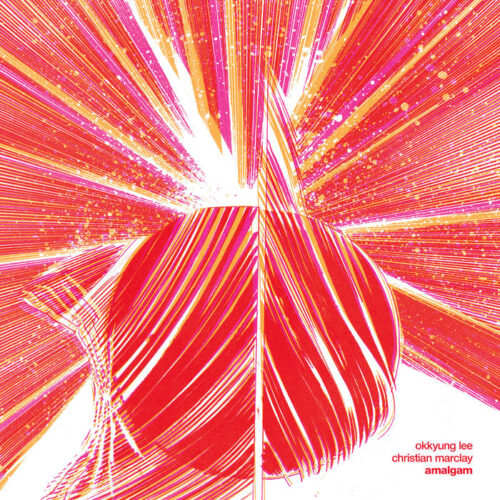 May 2014, arriving home after hearing the Café Oto performance now released as Amalgam, I began to write. Over time the text developed, augmented by relevant dreams, literature and boxing metaphors, to become integrated into my book, Into the Maelstrom. This is an extract from that passage:

“In the grey time of the gig, the drift away time, smell of room time, the time when magical implements and instruments are compressed into their road-sick cases, I watched from an eye corner as the tall man persuaded Christian Marclay to hand over a shard of plastic, placed the black dagger in his bag, then headed home. This savage triangle I recognised as debris…one of many during a duo with cellist Okkyung Lee in which their streams of interpenetrated sounds felt as volatile as live power cables, lightning strikes, snake bites, roaring bears, the finessed husbandry of potentially catastrophic rock falls. Something about the implacability of Okkyung Lee, the steel edge of her cello, not in its sound so much as its unmoveable force, something about the need to react to her presence as grit, as grinding, enforced a move away from the turntables out of which Marclay had been unleashing sound up until that point. Close in to a microphone, he was scratching a record with his fingernails, as if the evolutionary function of nails was as a polystylus designed to scrape music out of any surface: rocks, tree bark, elephant skin, the mist surrounding a waterfall, the bald head of an old person…

After the gig I had stood still on a spot that seemed to confer invisibility, observing, waiting, listening. Somebody new to the whole business said to me, why doesn’t everybody know about this music, why isn’t it celebrated and presented in big concert halls to huge audiences? She was alight with excitement, the shock of the new. Somebody else said, but it’s not always as good as this. I said, well isn’t that true of all music, whether it’s composition, improvisation, popular, esoteric, critically acclaimed, classic, old, new, whatever? Some is great; the rest is mediocre or otherwise unforgivable… ”

Listening now to the recording, more than two years later in a totally different environment is a markedly different experience, yet the intensity that made the concert so remarkable remains palpable. As finely poised as a tug of war between a steam train and a herd of wildebeest, this is music that celebrates all that is volatile, uncompromising, hypersensitive and deliriously inventive in improvisation.
credits