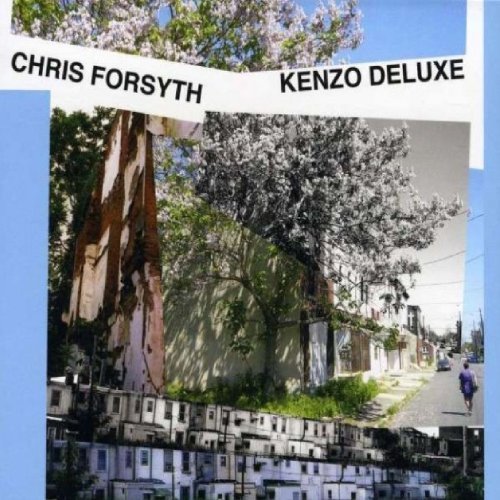 Guitarist Chris Forsyth is a unique voice in the realm of American music, having emerged from the challenging free form expressionism of his old group Peeesseye with a lyrical command rare in any genre. Forsyth has always relied on the vernacular of country and blues to make his point, while also maintaining an open-ended and experimental approach, collaborating with artists as varied as free folk goddess Meg Baird, noise-oriented trumpeter Nate Wooley, and analog synthesist Koen Holtkamp (of Mountains)along the way. His newest work brings his trademark lyricism to new heights in his most straightforward setting yet. Gone are the fleshed out rock band arrangements of last year’s Paranoid Cat LP, replaced on Kenzo Deluxe, by Forsyth shunning overdubs and playing his transcendent songs alone in a room on his electric guitar.
On top of a dedication to hypnotic Cosmic Americana, Forsyth possesses a remarkable technical skill. Listen to the strict timekeeping that anchors Kenzo Deluxe’s “Downs & Ups” and “East Kensington Run Down.” They’re quiet, meditative pieces, each lasting around 10 minutes, but they never feel lost. The accuracy in Forsyth’s finger picking keeps the tracks anchored. The two-part “Boston Street Lullaby,” on the other hand, shows the other reaches of his artistry. His bluesier side gives rise on “ Boston Street Lullaby No. 1,” drenched in soft reverb, while the waves of distortion on “Boston Street Lullaby No. 2,” serve as a centerpiece for the album, showing his love for noise and the pure sound of the electric guitar.

It’s the album’s opener, however, which will no doubt be the attention-grabber. Named for the Rolling Stones decadent and ill-fated 1972 tour documentary, “The First 10 Minutes of Cocksucker Blues” is an ethereal, imaginary score punctuated by slapback echo and guitar licks that wouldn’t sound out of place on a Group Doueh or Tinariwen record. And Forsyth has even paired it with the opening sequence of the never-officially-released film. It’s a bold move, bringing the Americana back home by way of the Brits who adored it so, and at the same time giving their stumbling boogie rock an almost ambient soundtrack.

Forsyth recorded the album over three days in the studio with the assistance of co-producer Scott Colburn, who has worked extensively with the Sun City Girls and Richard Bishop’s solo projects as well as Animal Collective and others. The result is a richly recorded album of five rewarding and listenable tracks. With no loss of vision, Forsyth has created his most accessible album to date, one that will engage guitar geeks, freak folks and the uninitiated alike in its trance-inducing glow.