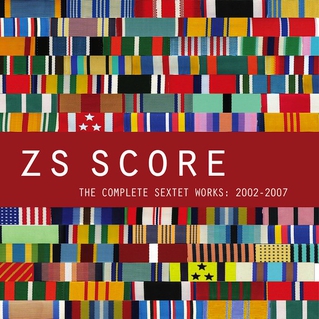 September 2012 New York City band Zs celebrates 10 years of being a band with the release of Score – The Complete Sextet Works: 2002-2007. Zs has been described with a dizzying array of musical vocabularies, and has performed alongside an equally dizzying complement of colleagues and collaborators ranging fromThrobbing Gristle’s Genesis P. Orridge, to Roscoe Mitchell, toChristian Wolf, not to mention hundreds of comrades from the Brooklyn DIY scene, that has been home to Zs’ myriad incarnations and musical and artistic tangents. Belonging nowhere and everywhere, Zs has absorbed the editorial space of Howard Stern andAlex Ross alike. In 10 years of activity, the band has changed in countless ways without ever changing a fierce commitment to inscrutable aesthetics and execution crafted to provoke reflection and challenge assumption in the consumption of music.

When Zs first formed the sextet, the band operated as a composers collective who played their own compositions. All members of the band huddled over sheet music on music stands illuminated by floodlights. The band was known for ensemble style rather than individual styles of the players, and developed a particular reputation for a near pathological commitment to unison execution of counter intuitive rhythms at an ear splitting volume, or at a virtually inaudible volume. Additionally, the band wore uniforms, a way of drawing attention away from the people playing in the band, and toward the group responsible for the monolithic rhythms and harmonies Zs spun out relentlessly at early shows. This stands in stark contrast to the emphasis on individual style found in Zs’ recent work. That said, this music is important in the development of Zs as it articulates the formation of the aesthetic and formal vocabulary that would form the underpinning for all future journeys the band would take.

At present Zs remains committed to constant change in method and stasis in intention – different means, people, and aesthetics, always meant to instigate questioning and challenge preconception. The band is working on writing their 3rd full length record and an EP, both due out in 2013. In the mean season, dive into the early world of Zs with Score – The Complete Sextet Works: 2002-2007.