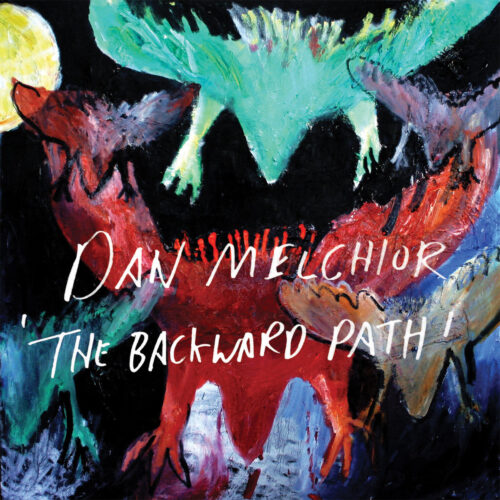 The Backward Path marks a departure for Dan Melchior in a number of ways. It is his first album to feature other musicians since his time with the Broke Revue, and it also marks a change in his songwriting methods, with more heartfelt sentiments being expressed rather than the usual flood of snide non sequiturs. It is also a quieter album, without much of the “did he mean it to sound like that?” sonic onslaught of Catbirds and Cardinals.

Dan’s wife Letha Rodman Melchior was diagnosed with cancer in late 2010, and since then the couple has been on something of an emotional roller coaster. This comes through in the lyrics of the songs on The Backward Path and is augmented beautifully by the contributions of C. Spencer Yeh (violin), Haley L. Fohr (vocals), Anthony Allman (keyboards), Ela Orleans (vocals, keyboards and guitar), and Sam Hillmer (Saxophone).

The vocal pieces are broken up with instrumentals that are nearest in tone to the “songs” on Dan’s acclaimed LP on Kye, Excerpts and Half Speeds, giving some room for the vocal pieces to sink in. The final result has more in common with Sister Lovers than Guitar Wolf, and we hope you will find this decidedly adventurous, but emotionally engaging music as satisfying as Dan found it to make.