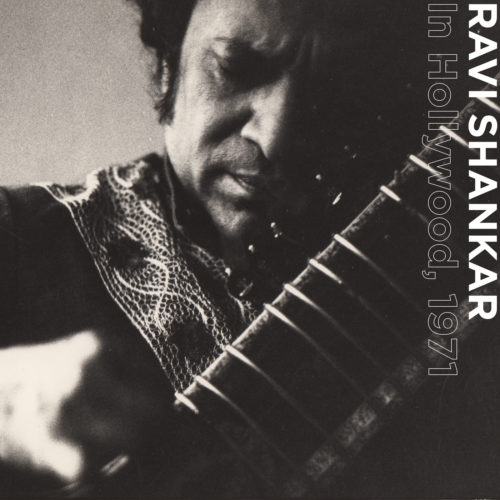 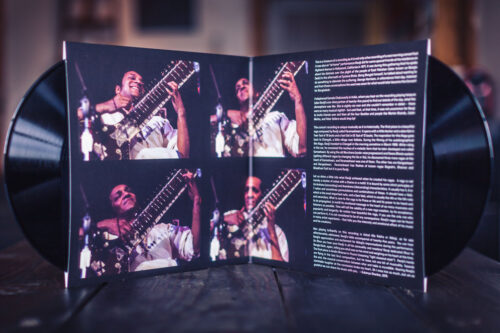 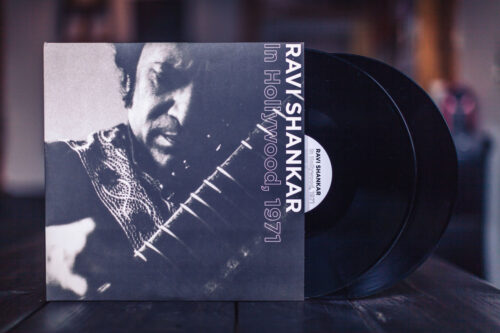 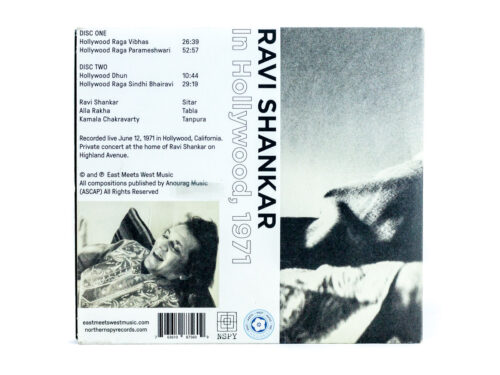 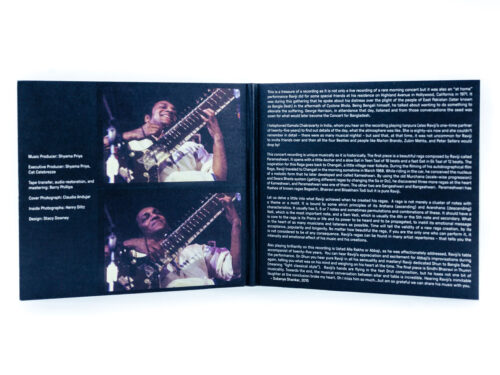 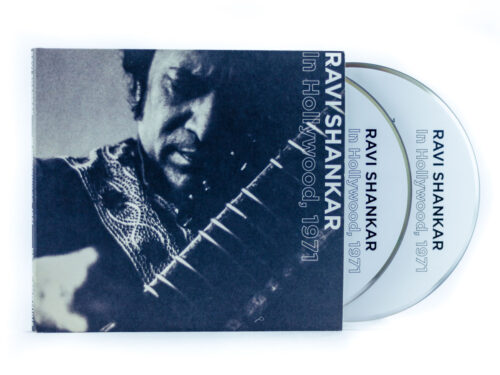 This is a treasure of a recording as it is not only a live recording of a rare morning concert but it was also an “at home” performance Raviji did for some special friends at his residence on Highland Avenue in Hollywood, California in 1971. It was during this gathering that he spoke about his distress over the plight of the people of East Pakistan (later known as Bangla Desh) in the aftermath of Cyclone Bhola. Being Bengali himself, he talked about wanting to do something to alleviate the suffering. George Harrison, in attendance that day, listened and from those conversations the seed was sown for what would later become the Concert for Bangladesh.

I telephoned Kamala Chakravarty in India, whom you hear on the recording playing tanpura (also Raviji’s one-time partner of twenty-five years) to find out details of the day, what the atmosphere was like. She is eighty-six now and she couldn’t remember in detail – there were so many musical nights! – but said that, at that time, it was not uncommon for Raviji to invite friends over and then all the four Beatles and people like Marlon Brando, Zubin Mehta, and Peter Sellers would to drop by!

This concert recording is unique musically as it is historically. The first piece is a beautiful raga composed by Raviji called Parameshwari. It opens with a little Aochar and a slow Gat in Teen taal of 16 beats and a fast gat in Ek Taal of 12 beats. The inspiration for this Raga goes back to Chengali, a little village near Kolkata. During the filming of his autobiographical film Raga, Raviji traveled to Chengali in the morning sometime in March 1968. While riding in the car, he conceived the nucleus of a melodic form that he later developed and called Kameshwari. By using the old Murchana (scale-wise progression) and Swara Bheda system (getting different ragas by changing the Sa or Do), he discovered three more ragas at the heart of Kameshwari, and Parameshwari was one of them. The other two are Gangeshwari and Rangeshwari. Parameshwari has flashes of known ragas Bageshri, Bhairavi and Bilaskhani Todi but it is pure Raviji.

Let us delve a little into what Raviji achieved when he created his ragas. A raga is not merely a cluster of notes with a theme or a motif. It is bound by some strict principles of its Arohana (ascending) and Avarohana (descending) characteristics. It usually has 5, 6 or 7 notes and sometimes permutations and combinations of these. It should have a Vadi, which is the most important note, and a Sam Vadi, which is usually the 4th or the 5th and note and secondary. What is core to the raga is its Prana or life and its power to be heard and to be propagated, to instill its emotional message in the heart of as many musicians and listeners as possible. Time will tell the validity of a new raga creation, by its acceptance, popularity and longevity. No matter how beautiful the raga, if you are the only one who can perform it, it is not considered to be of any consequence. Raviji’s ragas can be found in many artist repertoires – that tells you the intensity and emotional effect of his music and his creations.

Also playing brilliantly on this recording is Ustad Alla Rakha or Abbaji, as he was affectionately addressed, Raviji’s tabla accompanist of twenty-five years. You can hear Raviji’s appreciation and excitement for Abbaji’s improvisations during the performance. On Dhun you hear pure Raviji in all his sensuality and mastery! Raviji dedicated Dhun to Bangla Desh, again, telling you what was on his mind and weighing on his heart at the time. The final piece is Sindhi Bhairavi in Thumri (meaning “light classical style”). Raviji’s hands are flying in the fast Drut composition, but at he loses not one bit of musicality. Towards the end, the musical conversation between sitar and tabla is incredible. Hearing Raviji’s inimitable laughter at the conclusion broke my heart. Oh I miss him so much…but am so grateful we can share his music with you.