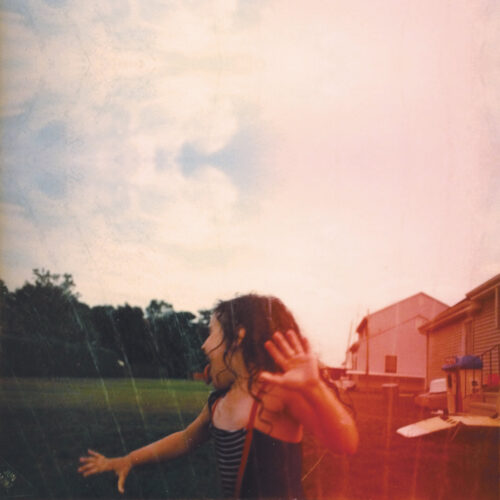 Parlor Walls’ debut album Opposites is appropriately named. The trio of Alyse Lamb (guitar, vocals), Kate Mohanty (saxophone), and Chris Mulligan (drums, synth) channel a sound that plays with extremes. At times heavy and playful, vulnerable and strong, dark and humorous, exacting and unhinged, it recalls the everyday taming we all do to harness our wild parts, and invites us to let them be. The band explores how far they can push the listener in one direction, while still holding the opposite qualities intact. How much dissonance and melody can exist at once? Can a rhythm be fun yet challenging?

From the opening track “Crime Engine Failure”, we get the unsettling feeling of gears churning. A relentless drumbeat refuses to evolve as the vocals begin the song in an all-together different timing. This push and pull is where the band thrives. Unsure where the anchor is, they perform a balancing act. Second track “Cover Me” whips in like a charging bull and settles on a groove-laden bass, only to dive into chaos with Mohanty’s box-cutter tone and Lamb’s pleading, urgent vocals. In “Play Opposites”, she begs the question, “Is this what you wanted Mother? Empty shells to fill your hole?”, as the music slowly unravels into a wash of noise. On songs “Love Again” and “Hesitation”, the trio walks the fine line between pure pleasure and madness, encouraging you to thrive in between the two.

It would be best to listen to Opposites in a giant cavern around a fire surrounded by your tribe for one last dance before you head out to fight the revolution. Walking a tightrope between genres, you could take this to be true: It rocks, it drops, it grooves, it melts, it rolls, and like most forces of nature and spirit it’s wisest to relax and maneuver with the current rather than wondering why.

“Parlor Walls are the band you hire to play while you dance around the world burning. This record plays like The Pop Group if they were fronted by Kim Gordon and James Chance. At times droney, dreamy, and disturbing, while still adhering to pop song constructs. This is fine decoupage of art-noise-punk stuck together with double sided scotch tape and then doused with glitter.” –Kevin Diamond

“In their new album, Opposites, singer Alyse Lamb doesn’t so much wear her heart on her sleeve as she does throw it on the floor in a blood-spattered mess, piecing it back together with a magnifying glass and a pair of tweezers. It’s not an album for getting out of one’s head or escaping one’s troubles, but rather, it’s for confronting and wrestling with them head-on.” – JP Basileo