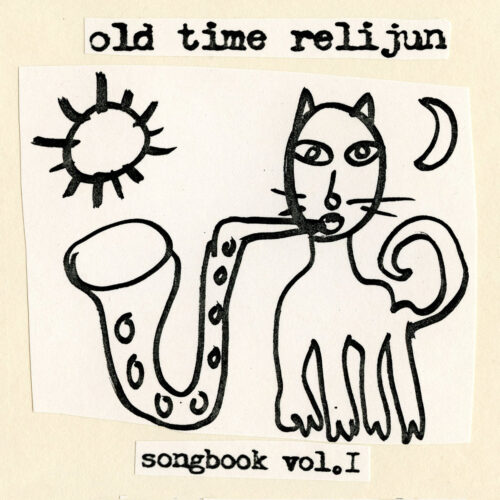 To have walked into K dorm at the lefty college out in Olympia, WA in 1995 was to experience an immediate assault on the senses. The slap of the stench of dancers writhing: hippies and scenesters, post-Nirvana poster-childs and riot grrls. And there was a good chance that at the far end of the floor bowing under the weight of bodies, the sons of Uterus and Fire, Old Time Relijun, were in charismatic glory. Their first recorded output, Songbook Vol. I, long out of print, is brought to revival by Brooklyn’s newest indie imprint, Northern Spy Records. Over the course of 7 albums, frontman Arrington de Dionyso (Malaikat Dan Singa) and upright bassist Aaron Hartman (Girls In Trouble) have established an indie rock avant-garde with elements of the naive, the spiritual, international folk sounds and shake your ass funkiness. Yet, nothing since has ever captured the rawness, the train wrecks and crocodile piss recorded by Diana Arens at Dub Narcotic back in those early days. Mastered for the first time, Northern Spy presents this CD digipak release, a classic from its artist, Arrington de Dionyso. Also, for you 7″ aficionados, 4 little gems from the album, Sabertooth Tiger, Mirror, and the 4-track versions of Baby Dragon and Lion Tamer, are a little crown to you to own on their own. The tent’s going up, the bibles are being passed around, it’ll all burn down before the end of the night. Don’t miss out.