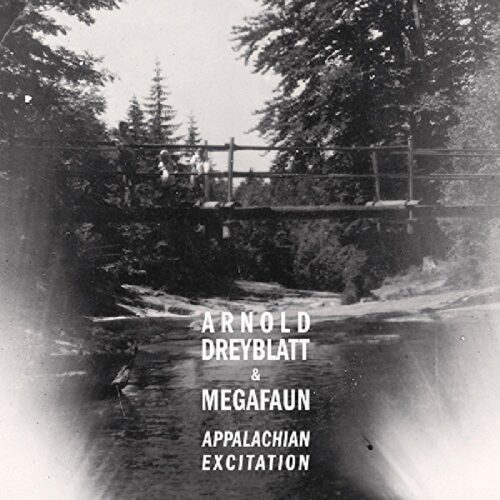 The meeting of composer Arnold Dreyblatt and psych-folk trio Megafaun shouldn’t be seen as unlikely just because it’s cross-generational, or even (arguably) cross-genre. Such categorizations have to be set aside before taking in their Appalachian Excitation.

Born in New York in 1953, Dreyblatt came up under such lauded experimental groundbreakers as Alvin Lucier, Pauline Oliveros and La Monte Young, obtaining a Master’s degree in composition from Wesleyan University. Now based in Berlin, where he is active as a visual artist and as a composer.  His music is based on his own vocabulary of pulse and self-designed instrumentation.

The North Carolina by way of Wisconsin trio Megafaun (comprised of brothers Brad and Phil Cook and Joe Westerlund) has been working since 1997, when the three met at the H.O.R.D.E. festival. After a decade of crafting their sound, Westerlund contacted Jeff Hunt, owner of the Table of the Elements label, looking to get in touch with Dreyblatt, whose work all three admired. The following year they were able to schedule a week long residency at Salem Art Works in the mountains of upstate New York, where Dreyblatt taught them the just intonation tuning system he’d developed as well as some of the instruments he’d devised. They presented Dreyblatt’s compositions at the 2008 Wire Festival in Chicago and concerts in Boston and NYC.

Busy schedules kept them from working together again until the 2012 Hopscotch Music Festival in Raleigh, North Carolina, just a stretch of mountains south from where they’d developed their joint sound. Excited about the performance, they booked the Pinebox Recording studio in Graham, N.C. to lay down the tracks that make up Appalachian Excitation. They connected again last February to play the Ecstatic Music Festival in New York City.

The album was recorded live in the studio with no click track and minimal separation, a new experience for the men of Megafaun. It’s “the most rewarding way to record,” said Joe Westerlund. “This record with Arnold marks a step towards Megafaun becoming more of a live-in-the-studio recording band, a more traditional and time-tested method.”

Speaking from the stage at Merkin Concert Hall during their Ecstatic Music appearance last year, Dreyblatt said such genre transcending collaborations wouldn’t have been possible several decades ago. “We are no longer one-dimensional people,” he announced. Experience the dimensions of Appalachian groove and time-honored minimalism anew with Dreyblatt and Megafaun.